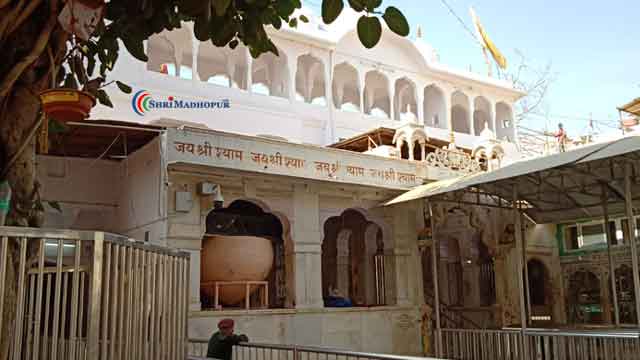 In the Rajashtan’s Sikar District there is a village called Khatu or Khatoo significant from the religious perspective. Sikar District is the part of Dhundhar Region of Rajasthan. Which is the home to the Khatu Shyam Temple, one of the India’s famous temple. Hindu deity Barbarika is admire as Khatu Shyam in Rajasthan. About two and a half decades ago, Khatushyamji’s name was only known in Rajasthan but now Khatushyam fame has expanded not just only in India but also throughout the world.

Even today, devotees with unwavering faith in their hearts travel long distances carrying saffron flags and singing psalms to the God. After all, Shyam Baba is known for confiding all the wishes of their devotees. The many Devis and Devas are intended to represent the different feature of the same god. 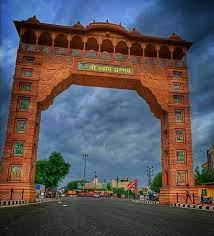 When the Kali Yuga reaches at its conclusion Barbarika, who was admired as Khatushyamji in western india is thought to be the God of Kali Yuga. He is known as Khatushyam ji in Rajasthan and Baliyadev in Gujrat. He fight to ensure the victory of his grandfathers, The Pandavas, who were thought  have been sacrified before the Mahabharata. Since Krishna and Shyamji are synonyms, he was worshipped in the same manner as Lord krishna. The brave prince Bhima, second of the Pandava Brothers, who was the grandfather of Lord Khatu shyam ji.

Khatushyamji was the offspring of Ghatotkacha, who was furthered by Bhima via Jagadamba one of his wives. He is also known as Khatu Naresh ( Ruler of Khatu, teen Ban Dhari (holders of three arrows), Sheesh rod ani ( head donator), lakhdatar (one who gives after proper judgement), Ahilawati ro laal ( Son of Ahilawati) , Hare ka Shahara (supporter of the defeated). The Marwaris of Shekhawati, Dhundhar, Bagad, Ahirwati and Haryana regions worship Lord Khatushyam as their local Deity, and many other group also regard him highly. Every year, people from all over india comes to seek his blessings with the large number of people came from Kolkata, West Bengal, Punjab and Haryana.

Barbarika ( Khatushyam) was a  courageous warrior. His mother taught him the basics of warfare. Lord Shiva praised his abilities and offered Shyam ji three unbreakable arrows. Later, the fire deity agni gave him the bow that would let him defeat the three worlds. Baba shyam desire to join the fight of Pandavas and Kauravas in the Mahabharata. By touching Jagdamba’s feet and makes a promise to stand on that side which was defeated, he then mounted his blue horse and enter to the battle field with his bow and three arrows. 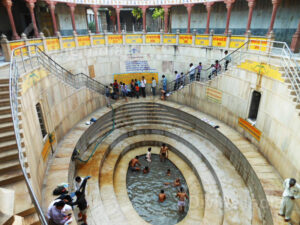 Lord krishna was already aware of his potential asked him the reason he was there with only three arrows and challenges him to show his power by shooting all the leaves of Pipal tree with only 1 arrow and placing one leaf under his own feet. Lord khatushyam told Lord Krishna that his 1 arrow is to destroy all things he intended. All the items he wanted to save marked if he used the second arrow. All the items he wants to save will be destroyed if he used third arrow.

With the help of bow and arrow Shyam made a hole in each leaf with only 1 arrow while also striking the leaf that was directly below Lord Krishna’s foot. When Lord krishna asked Shyam ji which side he will support, he responded as he promises his mother that he will support the side that was being defeated in the battle. Baba shyam offered himself as an ultimate sacrifice and donated his head to lord Krishna which is why he is known as Sheesh ke Danni.

Khatushyamji is the strongest warrior in the Mahabharata. But according to Saga Vyasa there is no character by the name  of Barbarika. Skanda Purana is the source of all legends, makes mention of khatushyam’s Story. Barbarika was the son of Ghatotkacha’s  according to the Skanda Purana( son of Bhim). He is also described in the other few sources as a warrior from the south.

Khatu shyam ji had a previous life as a yaksha before becoming a man. He was the moral man who choses to support the underdog group, leaving barbarika as the lone survivor. According to the legend Lord Krishna willingly requests Khatushyamji’s head in order to avoid dreadful outcome. Being impressed with his devotion, Lord Krishna granted a boon in appreciation for the courageous sacrifice. As he wanted,       Barbarika would be admire in his own form during the Kaliyug and known by the Lord krishna’s name Shyam ji. 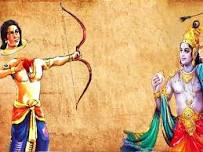 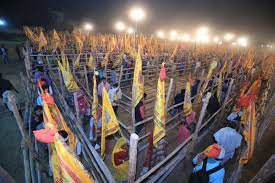 Pilgrims came from all over country carrying flags in their hands, singing shyam’s bhajans and playing with gulal devotees pay admiration to their holy journey. In the tents, many Shyam bhaktas hand out food to passing people. This  event is referred as Khatushyamji’s Wedding. Bhog is consist of Chaurama and kheer is prepared and offered to Baba as his prasad on Dwadashi( 12th day of the Phalguna month).

Khatushyamji was the brave warrior. He had three arrows on a bow. These three arrows could quickly put an end to any war. The people who require protection are thought to be identified by the first arrow used to mark the target that needed to be killed and the third one that actually takes out the targets that had been designated for death.

Khatu shyam mandir is the Hindu temple it is the significant pilgrimage site in the state of rajasthan. Which is situated in the Khato Village of  Sikar district. According to the Hindu mythology, khatushyamji is thought to be the manifestation of barbarika, Son of Ghatotkacha. It is said that people who pronounce his name with all their hearts are blessed to have every problem Vanished. It is said that the head of khatushyamji is kept in the temple.

Barbarika wish is to witness the Mahabharata battle, so Lord krishna himself perched his head a top a mountain so that Lord barbarika could witness the battle before it begins. In the Khatoo village the head was discovered buried after the Kali Yuga begin. After the kali Yuga star, the location was hidden. And on one occasion, a cow approached the buried spot and suddenly milk begin to flow from her udder. All the villagers are surprised by this incident, so they dug the location and exposed the buried head.

The head was given to the Brahmin and he worshipped it for many days and he was worried about what to done next. The king of khatu Roopsingh Chauhan then experienced a dream that motivated him to construct a temple and kept the head inside it. The temple was constructed on the eleventh day of the Shukla Paksha of the month of Phalguna and the idol was then set up there. 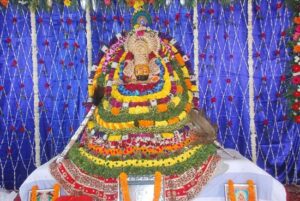 The king of khatu village was  Roopsingh Chauhan. Narmada Kanwar his wife once dream in which a deity commended her to remove his picture from the ground. The indicated location was then digged and is now known as Shyam kund.

Roopsingh chauhan constructed the original temple in 1027 AD after his wife had a dream about the hole in the ground named as Shyam Kund. At the request of the Marwar ruler at that time, a nobleman named as dewan was renovated the temple in 1720 AD. Rare stone is used to make Khatu Shyam’s idol. Many families worship khatushyam as their family deity. There is another temple in Gujrat, Ahmedabad and Lambha people bring their new- born babies to receive blessings from Khatu shyam ji. He is referred to as Baliya dev here.

White marbles are used in the construction of Khatu Shyam temple. Which is truly architectural marble. It is the favorite destination for devotees, many people go the temple to marvel known as Expensive praying room is encircled by walls that feature painted mythological scenes. And sanctum sanctorum’s shutters is covered with stunning silver sheet. The enter and exit gates of the temple are made of marble and have marble brackets and ornamental designs.

There are five aartis performed in the Khatu shyam temple:

This aarti is performed when the temple opens at the morning.

This aarti is performed when Khatu shyam ji’s idol is decorated.

This aarti is performed when Bhog or prasad is served to the Lord.

This aarti is performed in the late afternoon, just before sunset.

This aarti is performed just before the temple closes in the evening.

Reengus Junction (RGS) located 17 km from the temple is the closest railway station. And outside the railway station you can easily find the numbers of private and shared cabs and jeep that are always ready to take you to the temple. Nearest airport is the Jaipur Airport 80 km away from the temple. The Sawai Jai Singh Highway , NH-11 and Jaipur- Sikar roads are the best routes. There are many buses travel between Jaipur and Khatu and you can take auto-ricksaw from the Khatu bus stand.