Makhdumpur ganga fair is held before the year of independence 1929 on the Ganga Ghat in Makhdumpur merrut. This fair was started by the journalist Ramjidas    Hiteshi of Mawana. With time there were many changes occur in the format and location of the fair but this fair is the symbol of people’s faith and reverence. Thousands of devotees take a bath in the Ganga it is said that peoples who bath in the Ganga all the sins of that are vanished away.

Because of the covid-19 the fair is not held in before two year Yet, the faith remains the same. About one and a half decades ago, the ganga fair was held on the banks of the Ganges near the village of Makhdumpur. Now the flow of Ganga river is about 3 km away from the village. According to former village head Rajkumar in the year 1997 to 2000 there are heavy cuts in the Ganga river. Because of which the whole village is destroyed and came about 3 km away from the former place and settled at the present place. Which is known as Makhdumpur but it is the area of village Bajampur. 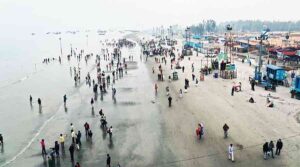 People travel distance to take a dip into the Ganga. This bathing festival represents faith, tradition and trust. This fair is attended by the people from all over the india. Over 500,00 people came to participate in this ganga fair every year. The authority ensure the security of all the visitors came to attend the fair.

People came from different area and make tent and lived there until the fair is over. The entire place is transformed into a tent house during the time of the fair. Many people came in the bullock carts and tractors to attend the fair. The bank of ganga is transformed into the tent city at the time of mela. Children fully enjoy the fair and play football, volleyball and cricket etc.

This fair takes place a week long people prepare food for themselves in their tents and lived there. Authorities provide services like electricity, water, and hospitality so that visitors don’t have to suffer for anything. Makhdumpur Ganga mela is filled with shops of sweets, jewellery, toys etc. people fully enjoy in this fair. Ramjidas Hiteshi was the founder of Founder of Makhdumpur Ganga fair. In 1945 Rajkumar Hiteshi have to go for the operation of Ayurvedic Gurukul college situated in Dholri. After that people of Arya Samaj continued this mela. After this, the member of Taktakalin Zila Panchayatv Rumal Singh had taken the responsibility of the fair. After the independence Rumal Singh joins the police. From then this fair was sponsored  by Zila Panchayat. This was the second largest mela after Garh Ganga Mela. 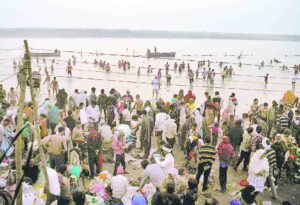 Bharat Singh the present head of the Makhdumpur village said that this fair is organized since mythological times is related to the faith and economy of local people. People who need of works get employed through this fair labourers and poor people run their families through the fair people are very sad from last two years because the fair do not take place because of the covid-19. The former head of the makhdumpur village said that this mela is just not a common fair it is the faith of people among the god.

You can easily reach at Makhdumpur Ganga fair by hiring taxing or bus. Or by their own vehicles.

You can easily reach At Makhdumpur fair easily after coming out of the railway station you can easily hire taxi or auto-rickshaw to reach at the fair.

Nearest airport is Delhi International airport you can hire taxi or auto-rickshaw from the outside of the Airport.

Distance from other cities to Makhdumpur